As I approached my father’s room in the nursing home I met my great aunt just leaving. I barely remember what we said to one another, but I didn’t forget her face. It was one I recognized well having many medical professionals in my family, but didn’t want to acknowledge it. I was still in denial about my father’s terminal condition.

My brother and my dad’s best friend were in the room. My dad was semi-lucid as they were talking with him and one another. I noticed a cart of pastries and coffee on the left-hand side of the room as I entered. In the month that my dad was there I had not seen this before. There was also a box of tissues on the cart.

I asked my brother how dad was doing. He said dad was acting a bit weird, but that was to be expected with his condition. I asked him why there was a cart of food in the room. He said did not know. We continued chatting and I remember calling my mom to see if she was coming soon.

At some point there was concern about the way my dad was reacting to the medication he was just given which lead up to the nurse being called into the room. She checked my dad’s vital signs and looked him over.

“Time for what?” I asked knowing what the nurse meant.

Everything became sort of surreal after that. I seem to remember the nurse leaving the room and closing the door. My brother and my dad’s best friend were each on opposite sides of my dad’s bed. They were talking to him, but he was not able to respond. He looked scared. I felt my stomach drop as the roller coaster, my dad’s life, rounded the top and began to gain speed towards the bottom.

My brother and my dad’s friend were each gripping his hands tightly as he began to struggle. His eyes were wide bulging and staring forward as he leaned up in his bed. Slowly he leaned back down into this bed.

I watched in horror as my dad, the man who was one of the toughest guys I ever knew, slipped away.

My hero, my dad who was legendary in our family for being tough as nails, had withered away. And I just watched him slip through my fingers with nothing more I could do.

​He was the bad boy. Some even describe him as Elvis or the Fonz. He was cool, grew up in a wealthy family, and very good-looking. He loved fast cars, smoking, ate what he wanted, and generally did not give a crap what people thought of him. He was not a follower and he was a handful to deal with at times. And as much as it use to drive me crazy, I admired him for not being a follower. He once told me that he admired the same about me. That meant a lot to me.

Everyone had tried to get my dad to change his ways and take care of his health. He tried many times over the years, but his habits had a tight grip on him. He continued to eat poorly after having part of his colon removed from the cancer. Even after having his left lung removed due to cancer he continued to smoke. I remember begging him to quit.

Months before the doctors had told him he was terminal, he was telling us that he was “not afraid to die”. He had given up on life. 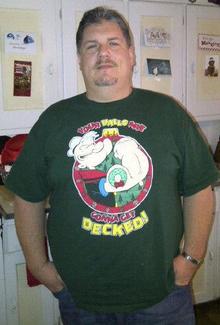 I was in poor health myself. I had just turned 40 years old and weighed over 400 pounds. I was a time bomb.

I was  rapidly accumulating a host of obesity-related health issues, and was losing my will to live  as I was giving up hope of ever losing all of that weight. I was pre-diabetic, had developed sleep apnea, high blood pressure, constant fungal infections, and acid reflux…

My father had developed lung and colon cancers from years of smoking cigarettes and poor eating habits. He did not have good skills for managing stress, so he turned to these addictions as a coping mechanism. Much like him I too had poor stress management skills and, although I was not a smoker, I turned to food during times of stress. So much so that it was slowly killing me. And I knew it.

The average person cannot relate to what it is like living in a 400+ pound body. Having to ask for a table at restaurants because you cannot fit in most booths. Not being able to buy the clothes you want to wear. Squeezing into theater seats. Needing a seat belt extender in your car to fit around a massive stomach. The shame of walking around in public knowing that people are staring at you thinking, “Look how fat that guy is.” People calling you things like “Big Guy” or “Big Mike”.

I hated those labels and I did not want to identify with them.

I was not happy with myself and with life in general. I hated myself and very few people around me knew it other than my wife. She knew that I didn’t want to live anymore. It was a horrible “weight” for her to carry but she honestly did not know what to do.

And I ate and ate not caring about my health. Wishing I would have a heart attack in my sleep.

It seems sort of pathetic and sad to me now, but it is the reality of what I felt. I just gave up on life, much like my dad.

See my article: 400 Pounds and Lost the Will to Live: How I took My Life Back

The day after my dad had passed away I told my mom,

“We can’t let dad’s death be in vain… We need to learn from his poor health habits.’’

And I didn’t want my kids and the rest of my family and friends to go through the pain again with me like we had with my dad.

So I decided to stand up on my own two feet and do something about it.

It took me four years and after a lot of soul-searching, but I figured out how. After all, I had over 20 years of experience losing some and gaining back even more.  I needed to slowly undo the years of bad habits and damage I had done to my body. I knew that I couldn’t simply go on a diet and exercise. I needed to change my life in order to make the it sustainable for good. I had to reinvent myself.

See my article: Reinventing Yourself: Meet a Brand New You

I wasn’t going to do this only to gain it all back again and more like I had in the past. It had to last this time. For good.

What I realized about myself is that in order to get control over what I was eating, I had to track everything I was consuming. I did some research on cell phone apps which could be used to keep a food diary. I knew this would be useful as I typically have my cell phone with me the majority of the time. This way I wouldn’t have to carry a paper diary and try to figure out calories later.

For my exercise I started with my Total Body Sculpt with Gilad videos 5 times a week. These were great for me to start as they were not too intense and allowed me to gradually build up my endurance. I have used Gilad’s videos for over 20 years so I knew they would be a great combination of low impact cardio and light weight training. Over time as my endurance increased I added new activities like walking and hiking into my routine.

And as the pounds began to drop, people started to take notice and ask me how I was doing it. By the time I had reached my first 100 pounds lost, people were in awe. I had done it in 6 months without surgery, being on a “diet”, or doing crazy high-intensity exercise… slow and steady. I began to tell people, “Small changes lead to big results.” That became my mantra. As I lost even more weight more and more people wanted to understand what I was doing. So I began to write about it. And after hundreds of people have read my articles, I was asked to speak on my “Small Changes Lead to Big Results” article.

I had no idea this would all eventually lead to me becoming legendary for being:

I just wanted to lose some weight and get healthy. I wanted to be normal.

I am happy to report that I no longer feel ashamed of myself. Additionally I have discovered that I have a gift for reaching people on an emotional level with my vivid imagery and motivating stories. In fact I find it inspiring when others are inspired!

See my article:Inspiring Others – Gives You Fuel

(featured in LinkedIn’s “What Inspires Me” section)

So now I am on a mission to help others. I have launched this website as a central place for people to find out what is going on in my world, to share tips and stories in my upcoming newsletter, and grow in this new endeavor.

This sad story leading me to realize that I needed to make big changes in my life is one of many which I am writing about to compile into a book of my life as a “super obese” man. I plan to detail my journey from hell and back and how I battled my obesity demon bare-handed and won*. I believe it is just as important to share stories and lessons about how I got to where I was as it is how I got out. I believe we should focus on prevention and teach our children about health early in their lives.

* Since I had written this article, I am changing that statement as I have learned that you never really beat your obesity, you learn tactics to manage it. – Mike

Let’s get the word and give some hope to the world!

I am living proof of that. 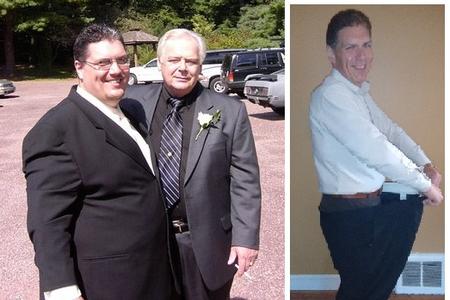 Dedicated to my dad, Patrick Harrington, without whom I would not be the man I am today.